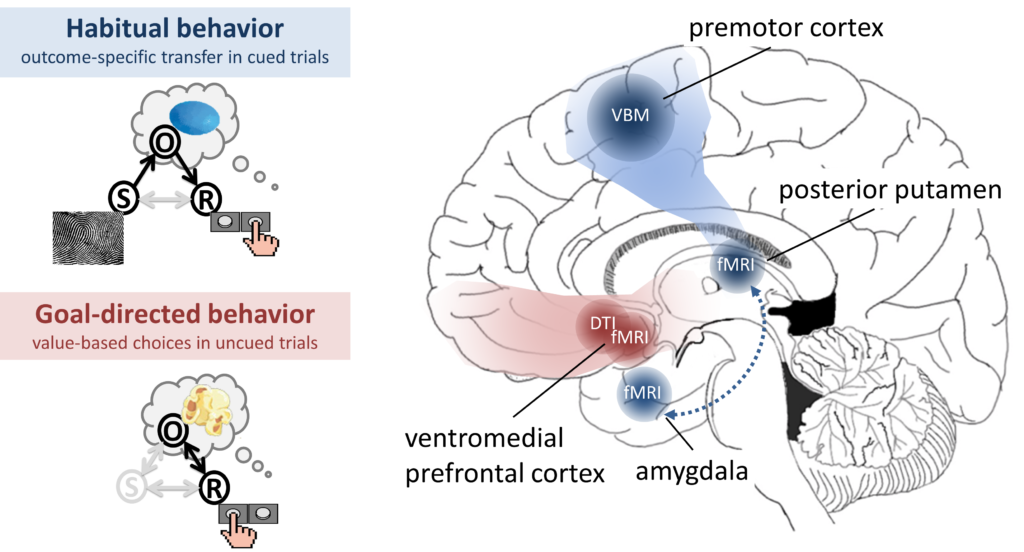 In this neuroimaging study, we investigated the effect of environmental stimuli on food choices (using a Pavlovian-instrumental transfer paradigm). We replicated earlier studies that found that sating participants on a particular food immediately reduces their responding to obtain this food in a computerized task. However, when food-associated (Pavlovian) stimuli are presented in the background, these will bias responding towards the signaled food regardless of satiation. Next, we related behavioral performance to multimodal MRI. The biasing effect of food-associated stimuli was related to brain activity in the posterior putamen and functional coupling with amygdala, and individual differences in gray matter in premotor cortex. This brain network was previously implicated in inflexible, outcome-insensitive habits. On the other hand, we found that goal-directed behavior in the absence of food-associated cues was related to brain activity in ventromedial prefrontal cortex and individual differences in white-matter tract connectivity with the caudate. Therefore, this study provides evidence for dissociable neural networks that subserve inflexible, stimulus-guided behavior versus goal-directed action.