In this recently published book by Elsevier (Editors: Morris, Bornstein, & Shenhav), Sanne de Wit contributed a chapter on habits and goal-directed action control in disorders of compulsivity, including substance abuse and obsessive-compulsive disorder. 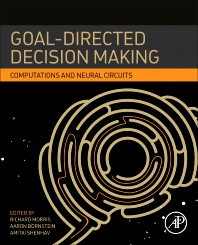 From the publisher’s site: Goal-Directed Decision Making: Computations and Neural Circuits examines the role of goal-directed choice. It begins with an examination of the computations performed by associated circuits, but then moves on to in-depth examinations on how goal-directed learning interacts with other forms of choice and response selection. This is the only book that embraces the multidisciplinary nature of this area of decision-making, integrating our knowledge of goal-directed decision-making from basic, computational, clinical, and ethology research into a single resource that is invaluable for neuroscientists, psychologists and computer scientists alike.